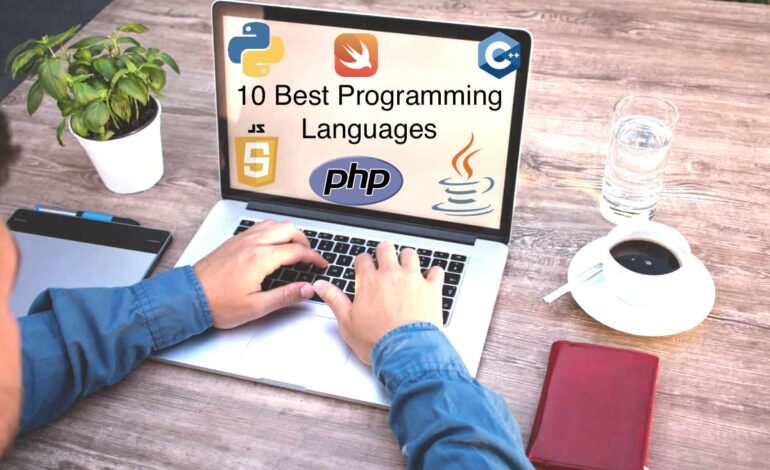 So, let’s explore the 10 best programming languages that will lead you to better job opportunities.

Python is now at the top in the programming world as it is soon going to take over Java. Python is beneficial in so many ways as we look at it from a developer’s eye. It supports multiple platforms and systems. It is object-oriented programming and helps to improve the developer’s productivity. Python allows us to handle the most complex web applications with ease. It also supports extensive libraries. Also, Python is easy to learn, so no worries.

The only thing here that is not acceptable is that we cannot use Python for mobile computing. Another disadvantage is that the database access layer of Python is primitive and underdeveloped. However, Python used for web & server development, desktop GUI’s, business applications, and scientific & numeric applications. It holds a large place when it comes to Artificial Intelligence & Machine Learning.

James Gosling developed Java in 1996 at Sun Microsystems. It is the most popular language in the current coding world. Most applications based on Java in the market. It is also an object-oriented language and offers various APIs for distinct fields such as networking, database connection, utilities, XML parsing, etc. It also holds up numerous open-source libraries. Java is a powerful open-source platform that consists of rapid development tools.

Java used for developing Android applications, web applications, and big data. Java is platform-independent. It uses the technique that is written once read anywhere. The only cons of this language are that memory management is a bit expensive. If the templates are absent, then it can limit you from creating high-quality data structures. Java is simple & easy to learn.

This programming language was developed by Robert Gentleman & Ross Ihaka in 1992 at the University of Auckland. It was released in 1995. R used in projects based on data science, machine learning, and statistical computing. One of the advantages of R language is that it is open-source software and hence, anyone can change it and use it. It is considered suitable for GNU/Linux & Microsoft Windows.

This language is difficult to learn, but if you wish to learn it, then nobody can stop you. It can run on a different OS. However, its memory management is not up to the mark. Also, the quality of some packages is not good at all. The pay package for this language is approximate $90,042 – $ 136,616 per year in the U.S.

JavaScript doesn’t support multiple inheritances which is a disadvantage of it. It is interpreted differently with distinct browsers. However, it is easy to learn, and it used in web development, mobile apps development, desktop app development, game development, etc.

The average pay for this language in the U.S. is approximately $110,981 per year.

This language was developed in 2010 by Apple. It was developed so that the iOS developers can work with this instead of Objective-C. The swift language is very simple; the syntax revolves around the simple English words. We can add new features to it that makes Swift a high-level language.

It consists of an automatic memory management feature that is an attraction to it. Swift is a new programming language that is why there are limited users and developers. Well, it is easy to understand, and the average package for the Swift developer revolves around $130,801 per year.

This is another popular language. If you are a student and undergoing any undergraduate degree or diploma in the engineering field, then you must be familiar with C++. It is the second language that is taught after C. C is considered as the mother language, and after that, C++ comes into play.

C++ is easier than C, and the syntax is somehow similar. C++ includes a large number of libraries and many frameworks. An advantage of C++ is that no garbage collector is there in the background.

There are some disadvantages of C++, such as it is quite complex and consists of a small standard library. If you are a beginner in the programming world, then this language might turn out to be difficult for you. Also, C++ does not contain any garbage collector, and there is no dynamic memory allocation.

C++ is widely used in graphic compilers and advanced computations. The average package of a C++ developer is around $113,865 per year.

C# is also one of the most popular languages in the software development industry. It was released in 2001. C# also uses a syntax similar to the C that is why it is easy to understand for the programmers who have worked with C. C# provides easy integration with Windows. It is fully integrated with .Net libraries. These are known for easy functionality and support. The only cons about C# are that it allows pointers in ‘unsafe’ blocks.

Just like many other programming languages, PHP is also one of the popular languages. Rasmus Lerdorf created it in 1994. It is simple and easy to understand. PHP is a functional and object-oriented language. It consists of a large open-source software community. It is a great language when it comes to software testing and deploying.

However, PHP lags when it comes to error handling and security purposes. Using PHP can slow down the website’s response. The average package of a PHP developer is $84,727 per year in the U.S.

All the coders are very well known with SQL. It stands for the Structured Query Language. It is used in the database management system. It is fast and easy to access. You can search for any data from a large number of files within a second. You can find the required data in the table.

It is robust and a secure way to protect your files. However, it runs on a single server. This means when you want to increase the speed, you have to upgrade the hardware. Another con of SQL is that if the server stops working, then all the system stops.

This is also known as Golang. It was created in 2009 by Robert Griesemer, Rob Pike, and Ken Thompson at Google. This is a fast language, and the syntax is shorter than other languages. Go is easy to learn. It supports standard libraries and provides access to handy built-in functions.

However, Go consists of poor library support. The interfaces present in Go are implicit. Also, dependency management is fractured. Go is difficult to learn.
It is used in many applications like GUI and web applications. The average package is around $94,082 per year in the U.S.

The Go Workshop: A New, Interactive Approach to Learning Go

Well, Python and Swift are the ones that are demanded by the MNC’s. You can explore more about the other programming languages. You can also go according to different fields such as a software developer, full-stack developer, front-end developer, back-end developer, etc.

For discussing more, you can take the advice of your mentors and tutors. Also, seniors are the best buddies to guide you. So, discuss with them and follow your passion for coding.