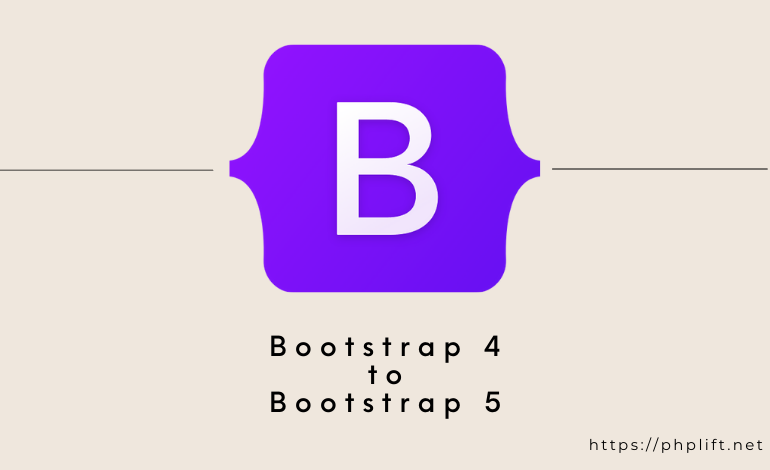 Bootstrap has been a vital tool for web developers for many years. It has always maintained a high standard. Bootstrap’s most significant advantage is its ease of use and learning. Bootstrap 5 has many important updates. Although the framework was not wholly rewritten, some key features were added, including a redesign form control, new custom properties, improved code quality, and an expanded color palette.

Bootstrap 5’s latest version does not depend on jQuery but instead relies on vanilla JS. Dropped support for IE 10 & 11. Bootstrap 4 and Bootstrap 5 have different logos.

Bootstrap 4 to Bootstrap 5 are some options you might consider when migrating into Bootstrap 4. For source code, download the Zip file. You can unzip the zip file to find many files, but only the “Dist” is essential. This is where the core CSS/JS lives.

As you can see, there are many CSS and JS files inside. You will only need two files to use the Bootstrap 5 feature in its minified version.

There are many ways to install Bootstrap 5. It can be installed via source code to comply with CSS and JS. Or you can include it with modern development tools like npm and RubyGems. You can download the files via source code and then use them according to your needs.

This can be used to compile Bootstrap with your asset pipeline via JavaScript and Sass. This version supports Sass compiler (Libsass and Ruby Sass are supported) and Autoprefixer for CSS vendor prefixing.

This is ready-to-use, compiled code for Bootstrap 5 Alpha that you can easily integrate with your project. It contains compiled and minified CSS bundles and a compiled minified JavaScript plugin.

Bootstrap has one of the best features. It gives you a list of compatible package managers, which saves time. RubyGems package managers such as NuGet, npm, and yarn are essential for programmers to create the conditions that your project will be executed.

To use Bootstrap 5, you can attach the Content Delivery Network file to your HTML file. This is for people who don’t want to deal with JavaScript or CSS codes that have been compiled.

Bootstrap 4 and older versions may require you to adjust your support level for Bootstrap 5. Bootstrap 5 dropped Internet Explorer 10/11. This was directly translated to the Bootstrap 4 programmer. As the Bootstrap 5 migration occurs, it is necessary to adjust your support system to accommodate the new version. Google Chrome and Mozilla Firefox have supported browsers and the recently unveiled Microsoft Edge Browser. Firefox also includes the most recent ESR version.

Alternative browsers that do not use WebKit, Blink or Gecko are not supported. Version 7 or higher is the minimum supported version for mobile support.

It is version 6 or higher on WebView and browser for Android. Official support is not available for older Android and iOs versions.

There are not many differences between the old Bootstrap and the new, but there have been improvements in the functionality of some elements. There are, however, still some changes.

Bootstrap’s most crucial feature is jQuery. Shockingly, Bootstrap 5 does not contain jQuery. Bootstrap could be easily integrated with a JavaScript-based framework, eliminating the most considerable side of client dependency. This is the most significant change in Bootstrap. This change was inevitable, but many developers are not happy about it. The reason is that jQuery has become a powerful platform for cross-browser code.

Note: This is a simple jQuery replaced with vanilla jQuery. This will allow you to integrate with more frameworks, but users can still use jQuery.

Bootstrap 4 requires you to add a wrapper element. Form-group so that the margin is precisely what you want. Elements such as class.form control has a width that is 100%. This includes form elements such as the input and textarea. To get the best output from Bootstrap 4, follow this procedure.

Bootstrap 5 introduced the grid system and the. The form group class was eliminated. This will allow for customized displays that render consistently across devices and browsers.

This is another difference between Bootstrap 4 and 5. It would be unnecessary to switch between your codebase and Sass or CSS. This is because the colour palette has been integrated. The colour palette is extensive, giving you many options. You can easily change the look and feel of your app without leaving the codebase.

You can choose your colour, which is available in Sass variables and a Sass map in Bootstrap’s/_variables.scss.

Bootstrap 5 is disappointed that there is no integrated icon library. It is currently exploring its own vector graphics library.

It appears that there have been some changes in bootstrap5’s SVG library.

Bootstrap 5’s grid system is entirely new. Instead of replacing the grid system with a new one, we have modified it.

These are the significant changes to the Grid system.

We are interested in learning how to create new CSS libraries and toolkits. It’s been challenging to build web-based tools for over a decade. Bootstrap5 has a brand-new utility API.

Bootstrap 5 will bring many improvements and changes to the future, including more JavaScript plugin integration.

5 JavaScript Libraries You Can Use For Your Next Project