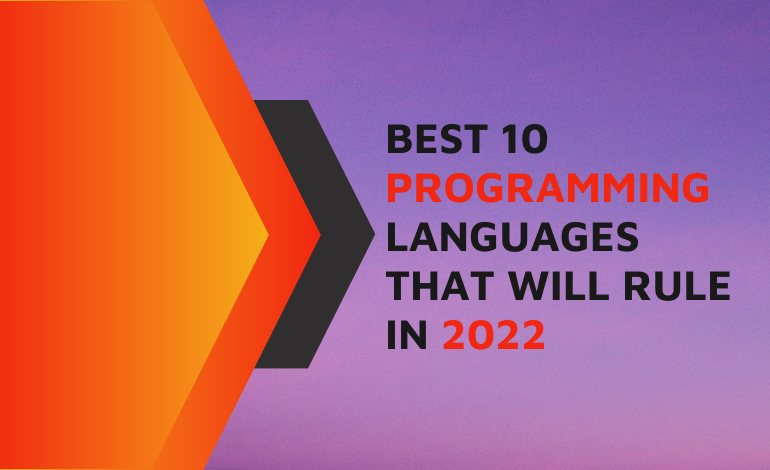 The IT industry is fast-growing, which has led to more people wanting to take on different positions and be immersed in programming. To be successful in this area, it is essential to possess the proper knowledge. Today, you can find an increasing need for Python, Java, or PHP Development Services because they are popular programming languages that can enhance any project. Moreover, a variety of programming languages offer numerous opportunities for career advancement, and it is essential to become proficient in them to get prospects to earn a living in this modern-day and time.

The term “programming language” refers to being used by programmers to communicate with computers. These languages were designed for the creation of mobile apps, desktop apps, and websites. The code can be written using C, C++, Python, Java, etc., to accomplish specific tasks. Learning programming languages is essential in all fields, whether computer science, machine learning, or data science. Therefore, here are a few popular languages that you must study in today’s times.
The Most Popular Programming Languages You Need to Learn for 2022

It is a highly well-known programming language among developers. Many large IT firms such as Microsoft, Google, and many others utilize the language. Although JavaScript is famous for incorporating responsive elements into web pages, it’s additionally used for other purposes. It is used to develop front-end and back-end applications. Programmers are interested in it because they can use it with Node, React, and Vue. It is likely to dominate by 2022 since a myriad of websites heavily rely on JavaScript.

C and C++ can be loved by IT companies like Adobe, Oracle, Nvidia, and Microsoft. C is thought of as an apropos language to create low-level systems like operating systems, kernel programming, and a variety of other applications. A variety of programming languages share specific characteristics. C++ is focused on objects and was developed to complement C. Nowadays, it is employed to program games, competitive programming development, and GUI.

It is among the most popular languages to begin a career in the area of programming. It is simpler to learn and has a simple learning curve. It is used extensively to develop Software Programming Services, Python development services, and many other areas. It has excellent library support, improved interaction with other languages, GUI programming, and automatic garbage collection. Flask, Django, and Pyramid are three frameworks in Python which are easy to use and more straightforward to use.

The Java language is an object-oriented programming language that is capable of writing once and then running everywhere. It permits programs to run on any platform that can support this language, Java, without restarting the compiler. Most commonly, it is used to provide Java development services for mobile, web, and desktop apps. In addition, large companies such as Amazon and Flipkart use Java that offers a wide range of job opportunities.

Dart language is one of the contributions to Google, which competes against TypeScript that is part of Microsoft. It is well-loved by developers from all over the world due to its ease of use. Dart is utilized in the creation of applications that can run on various platforms. Like JavaScript, Dart also follows the write once, run everywhere principle.
Nowadays, Dart is primarily used within the Flutter framework that is used for mobile app development. Flutter is an entirely new framework. However, it is now one of the top frameworks. Dart is easy to learn curve when compared to JavaScript and also simplifies complex applications.

It is also known as JavaScript superset and has the same functionality as JavaScript. TypeScript is used to develop web applications, desktop, and mobile app development. It is a programming language designed to build web apps or other web application processes and does not have anything to do with the research community. However, its new features may increase interest in the field of research. TypeScript is a language that has simplified difficult-to-understand behavior, which makes it relatively more straightforward.

Some of the most notable platforms, like Instagram and TikTok, utilize Kotlin. It’s an incredibly new programming language used to develop Android applications. It is currently at the top of the list of options 40. Kotlin is utilized for application design and gaming, analytics in addition to IoT applications. These are some of the significant fields of interest in the current and the future.

Numerous popular websites such as Facebook, WordPress, and Wikipedia utilize PHP. It is an open-source server-side scripting language that is commonly employed for the development of websites. It is a universal language that includes compatibility with various platforms and many object-oriented programming capabilities. PHP is a language that allows simple HTML, JavaScript, and CSS interaction. It is a language that is easy to learn with a vast community. Symfony, as well as Laravel, are two of the PHP frameworks of recent.

It’s a relative newcomer to the top list of ranking. At present, Scala developers have a significant demand because the language can be used to fulfill various needs. The language is employed to develop custom software. LinkedIn, Tumblr, and Twitter are among the most well-known platforms that make use of Scala. It’s concise and practical code, and it is suitable with Java.

Google developed it; Go is one of the best programming languages. It has gained a lot of attention because of its effectiveness and ability to perform multiple tasks simultaneously. It is a basic syntax and contains only a handful of complicated functions. It comes with an extensive library and sophisticated static analysis tools.

9 Tricks and Tips to Search Google Like a Pro