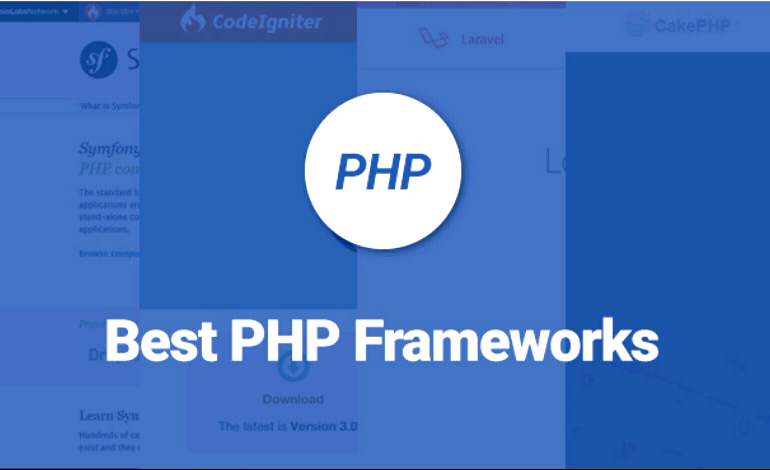 Most of the developers found PHP is the right developing language which works perfectly from server-side. Using such type of scripting languages has been boomed since the interdiction of inline code in static HTML.

Currently, demand of customers has been increased. They want multifunctional websites those can easily fill up their requirements. Such type of demands has raised challenge by developers and such complex demands take too much time and effort to start. This is the reason for which developers had to change their focus from basic HTML and CSS. PHP frameworks provide a perfect adequate platform those will really make the sites more functional and user friendly.

Why to choose a PHP framework over other programming languages?

PHP frameworks are preferred due to their functions and less time consuming features. Mainly, they act brilliantly to reduce developing hours avoiding the requirement of start coding from scratch. Without an authenticated PHP framework, it is truly difficult to manage the codes in that manner. Mainly PHP being operated fundamentals by the Model View Controller, which is famous as the various patterns available in various programming languages, creating a connection between the domain logic and interface. Mainly domain logic is deal with the quality of interpretation of information between database and user interface. It makes the entire process easier and logical.

Here are most popular PHP frameworks

Laravel framework designed for rapidly building applications using the MVC architecture. One of the most popular frameworks available with 90% of training available in market. Some features of laravel is unit testing, RESTful controllers, ORM, Queue management, lightweight Blade templating engine, a packaging system, and now Laravel is the only framework to introduce routing in a abstract way. Best thing about laravel is it handeles noSQL like MongoDB or Redis.

Zend is another popular and object oriented framework that is being used by many developers. It utilizes various object oriented concepts like interfaces. Such type of concepts makes it expandable to some extent. It allows developers to use their own variations and it is very helpful when developers are tasked to develop customized websites. While a developer is able to customize ZF on its own requirement, it enhances the functionality and makes that project unique. Due to its OO nature, developers can easily same functionality in different projects as well.

Yii is one of the most popular PHP frameworks that are being used in present websites. It mainly uses to accelerate the functionality of the website and makes it faster compared to different PHP frameworks. It generally let developers to access with hundred percent object-oriented and Don’t-Repeat-Yourself concepts that caters a clean and proper logical code base.

Furthermore, it is incorporated with jQuery and comes with a set which is enabled with AJAX. Along with that, it utilizes easy-to-use skinning and theming mechanism so these are the obvious reason for which developers choose these frameworks for their websites. It has also powerful code generator which is called as GII and it facilitates with OOP (Object Oriented Programming) and speedy prototyping that allows users to generate the code they needed.

Aura is the short form of A Automatic change Rule Assistant. This is one of the latest PHP frameworks being used by developers and using these frameworks, developers make sites extremely functional and those meet to customer requirement. This is compatible and completely checked and its individual libraries can be totally utilized in any type of coding structure. The libraries are being used here, are self closed and never rely further packages. Developers, those are always seeking cleaning, coding and decoupled libraries, they prefer to use it firstly. Apart from them, it also provides options for thoroughly checked and standard structure.

Almost all developers want to reduce their page load time and increase the speed of functions. In this fast moving world, late page load can jolt the business or the purpose that site has been constructed, Furthermore, developers always focus on stability and adaptable architecture that could boost their site functionality. As opposed by different lightweight frameworks, those never give full credit to full stack those are always focus on effectiveness. For beginners, this is the right way to learn and understand easily. It also provides stable codebase which is not to get in the way and let developers to write own code to maximize the functionality and to meet the customer requirement.

Kohana is another PHP framework that makes the development more objective and user friendly. This is open source with OO feature and guided by the MVC web development framework and being built by using PHP5. This is easy to use for any type of professional websites. People, those want to develop a personal website; surely they can use this framework without much hassle. It is known as very strong MVC framework just after the Codeigniter. This iconic framework is being developed in order to perceive the users to some extent and some features also available those are hard to find in any other PHP framework. Such features are easy development process; process time is lesser than others, measurable, routing, easy configuration and many more. Accumulating all these features, Kohana is capable enough to satisfy a developer with its services.

Phalcon framework is preferred for its great speed. This is another PHP module that has been written in C language. For full-stack framework, these are the best model to choose for. This user friendly frame is open-sourced and available for all. Developers have written this framework in basic “C” language is because to achieve a greater speed of execution. Plus, this is able to handle more HTTP requests compared to any other frameworks; those are being used in PHPP. Also, it uses a little developing resource.  C-extensions are loaded together known as one time process on the web server. In this framework, no matter which type of applications you have, they are can easily provide with proper classes and functions. It has compiled its own code and there can’t be any interpretation possible.

With the rising demand of website functionalities, developers are working hard to meet all market requirements. Clients also now want compact, easy and light websites those are capable enough to be functioning in small space.  This is where the Fuel PHP framework comes to the limelight.

Fuel PHP is simpler compared to other PHP frameworks. Plus, it is flexible, community driven and comes with PHP 5.3+ frameworks also it is based on the best ideas of different frameworks. At the present time, it comes with version 2 of the project and currently in beta stage.

FuelPHP is known as Model-View-Controller framework which was designed from its basic to enjoy full support for HMVC which is known as a part of its architecture. This is not the limitation, various developers add various presentation models into a mix which gives the option to add most powerful layer to be properly set between the controller and the view. Sites those need more router based approach where you can route straightly to closure, FuelPHP is right for them to choose for further execution.

A developer gets really dizzy while performing across all these frameworks. This is not an easy task. Developers use multiple ways to use them. Plus, in order to provide maximum benefits to the client, developers have to work hardly without much hassle. In order to make such developments easy, these PHP frameworks are really great to assume for. With requirement, such frameworks get developed and now someone can easily enjoy them while your program is running more consistently and flawlessly than before.

How to Extract Text from PDF using PHP

Is PHP dead in 2021? Is PHP still relevant or worth the effort?