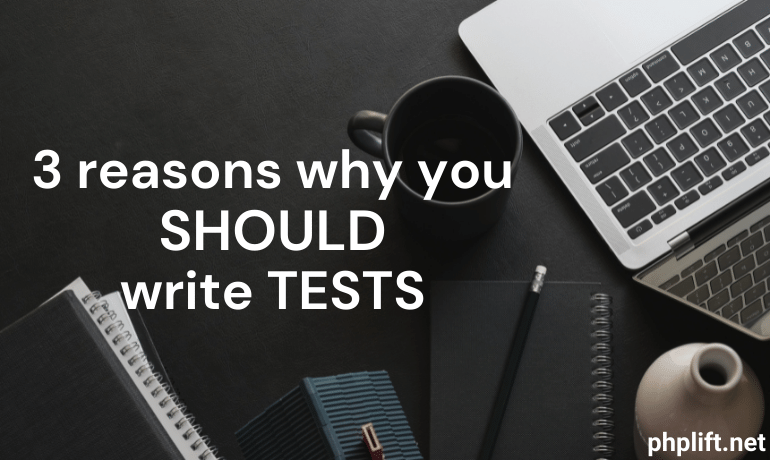 Writing tests is something I believe a large number of developers do later. It’s often the case when they are learning to code, whether it’s by themselves, in boot camps, or in a university setting, tests are often not thought of as.

I’m not sure Why is testing not being addressed enough? When you begin working on production projects or as a team, you will often discover that testing is a task you must do.

I believe that a large part of the issue is the argument for writing tests not being made clear enough. It’s like the development version of office paperwork. No one wants to take on the task. Let me discuss the reasons why you ought to write automated tests.

In the majority of workplaces, the typical situation is as follows. You’re developing a REST endpoint to connect to an API. It’s initially quite simple but as time passes, it becomes increasingly complex. Soon you’re using repositories, caching, and everything is a bit difficult to work with. Because you’re concerned about breaking things, you don’t change the code, and eventually, it is transformed into a spaghetti code that nobody wants to deal with.

How do you define automated testing?

In simple terms, it is about checking that your software does what it’s supposed to accomplish. You communicate with the API you’ve developed and claim that the right actions are taking place. This could be an HTTP reply code or checking whether an entry exists in the database or other things.

It’s also important to mention that testing isn’t a magic bullet. It’s based on the same rules as most other things GIGO (Garbage into, Garbage out). You must ensure all the tests you create are relevant and valuable otherwise, they are useless.

For testing, the most efficient method to begin is to choose one of the numerous frameworks that are available for your preferred language. Here are a few common testing frameworks for PHP as well as JavaScript.

Why should you create automated tests?

As I said earlier it’s not difficult to design these huge classes that are incredibly heavy. One of the advantages of testing is the confidence you gain as a programmer. It is possible to make any changes you like, simply test the program and be aware of the moment you’ve made a mistake.

This provides you with plenty of flexibility. You are not limited to refactoring code with ease and without hassle, but also try out options without worrying about making code break.

2. Thinking as an individual consumer

Testing can require you to think in a different way. It is important to remove your developer hat and take on your customer hat. It doesn’t matter if this is how a user will use an HTTP API or package, you are able to design your system in a manner that’s best for the end-user.

It allows you to come up with edge cases for how users might decide for interaction with the app. How often have users used your application in ways you didn’t anticipate?

Contrary to what the majority of people believe, taking tests can help you save time. What does this mean when you write the test and the test itself? It’s because it allows you to detect bugs faster you’re less likely to devote time to debugging for the first time. If a bug is discovered on your system, create an experiment to replicate the issue and after that, you can work with the application to determine the cause.

Testing is something you write about to invest in for the future.

There is a moment when you should not create automated tests?

In general, there is no rule of thumb. But keep in mind that this isn’t an official law, so take your time and use your judgment. If you’re creating an application to experiment with an idea, and you’re not planning to release it to the world at large, then there’s absolutely no reason to avoid making any tests. However, it is an excellent practice to start, and as you practice it, the easier it becomes.

9 Tricks and Tips to Search Google Like a Pro